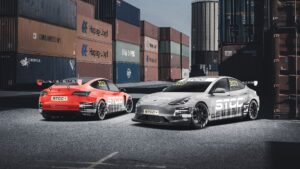 “We have created a set of sustainable electric regulations that are designed to provide the best and most affordable racing for national teams, drivers and promoters around the world,” said Daniel Haglöf, founder of EPWR.

The STCC will become the world’s first 100% electric national touring car championship in 2023 with the new regulations from EPWR.

“The entire society is currently going through an electric revolution and the STCC becomes a part of that development with EPWR,” said Daniel Haglöf, founder of EPWR.

“Motorsport has always been a strong force in technical development for the automotive industry and with the electrification of the STCC through EPWR, we will retake the position at the very front of the development.”

The new race cars from EPWR feature a bespoke electric drivetrain with a 45-kWh battery of 800 volt, producing 550 horsepower – figures which translates to performance of 0-100 km/h in less than three seconds and a top speed of close to 300km/h.

The new race cars are based on the latest electric production cars that are sold to the general public. The cars are then extensively modified for racing in terms of safety equipment, brakes, dampers and more.

A first production batch of 12 cars are currently being produced. The first model to be revealed for the STCC is based on the Tesla Model 3, further will be revealed later during the year.

“The very base concept of the new cars from EPWR is that they must be spectacular to watch, sustainable to run – both in terms of the environment and for the teams racing on a national level,” said Daniel Haglöf.

“The electrification provides promoters with new opportunities for exciting racing which can be held in the middle of cities and racing on equal terms, both for women and men – something that cannot be offered by many other elite sports.”

The STCC will return to street circuits for the first time in more than five years thanks to the adoption of the new regulations from EPWR, signing a three-year contract to race on a street circuit in Helsingborg, Sweden, from 2023.

“Electrification is the single most important step forward for the STCC and Scandinavian motorsport since the start of the championship in 1996 – we’re writing history today,” said Micke Bern, Managing Director of STCC.

“We are very happy to finally launch that we will race with the EPWR concept. It is great for us as a promoter to use this as a platform to inspire society to a sustainable transition through spectacular electrified racing. The fact that we are also able to return street races to the calendar together with Helsingborg is another message of strength that this programme enables.”

About STCC
The Scandinavian Touring Car Championship (STCC) is the leading racing championship in Scandinavia, founded in 1996. The championship races heavily modified touring cars in an explosive short and adrenaline-filled format on the best circuits Scandinavia has got to offer. The championship will be electrified from 2023 with all-new race cars of close to 550 horsepower, the most powerful cars in the history of the championship. The STCC races are broadcast LIVE through the streaming platform STCC+.

Mikaela Åhlin-Kottulinsky is going to take on a new role in 2022 as official development driver for EPWR with focus on the new 100% electric drivetrain prototype PWR002. EPWR is a new technical concept for the future of racing with a strong focus on sustainability. “I’ve believed in electric racing for a long time and […]

EPWR will showcase the new PWR002 prototype on track during the STCC finale at Mantorp Park this weekend ahead of the 2023 season when the championship will be the world’s first 100% electric national touring car championship. “This is closing the circle for us as we showed our very first prototype, the PWR001, at Mantorp […]
Share on TwitterTweet
Share on LinkedIn Share