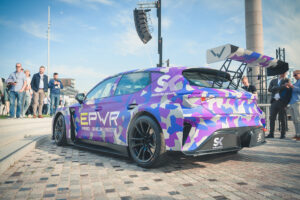 EPWR will showcase the new PWR002 prototype on track during the STCC finale at Mantorp Park this weekend ahead of the 2023 season when the championship will be the world’s first 100% electric national touring car championship.

“This is closing the circle for us as we showed our very first prototype, the PWR001, at Mantorp in 2018. The PWR002 is a major leap forward in all areas and a result of a long development process ahead of the 2023 season when we will write history together with the STCC,” said Emil Axelsson of EPWR.

EPWR will bring sustainability into racing – two words that have not previously belonged together – through the new 100% electric touring car regulations which the STCC will pioneer next year.

Another cornerstone of EPWR is relevance to the automotive industry which goes hand in hand with the ongoing electrification in society.

Development and production of the first batch of new cars for the 2023 STCC season is currently ongoing, race cars which are based on the latest electric production cars – such as the Tesla Model 3 – that are available to the general public.

Experienced racer Joel Eriksson, who has raced in Formula E, will drive the PWR002
at Mantorp Park – for further information, visit: stcc.se